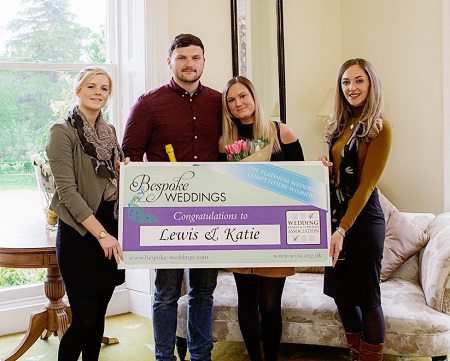 Lewis & Katie won the wedding of their dreams through the Bespoke Competition at Shottle Hall, their prize included Venue Hire, and a Food & Drinks Package!

Lewis & Katie met at school and soon became childhood sweethearts! Lewis joined the army, and less than a year later, they found out they were going to be parents! They welcomed beautiful Isabella into the world on 10th November 2010, found a family home and the love for her brought them close than ever.

7 months later Lewis was deployed to Afghanistan for 6 months, then he deployed again the following May for 7 months and again in October 2013. During those times the couple kept in touch sending lots of letters & parcels and using social media, and counted down the days until they were together again.

On the 22nd December 2015 Lewis proposed at home (where the couple love being the most), and after entering the Bespoke Competition their Wedding dreams became a reality when they were selected to win Round One & Two!

Lewis & Katie were over the moon when they found out they were the lucky winners of the Venue Hire and Food & Drink Package at Shottle Hall and are now looking forward to saying “I do” on the 30th May 2018!

Shottle Hall is an elegant country house set in 4 acres of beautifully landscaped gardens and 14 acres of parkland, with stunning views over the Derbyshire countryside. It is situated between Belper and Ashbourne in a very rural but accessible location, on the south-eastern fringe of the Peak District National Park.

The Hall with it’s unique blend of traditional and contemporary design hosts eight luxury bedrooms each with their own individual character, and with a stylish lounge, two dining rooms, bar and library, Shottle Hall makes for an exceptional wedding venue.
Also on the Shottle Hall Estate is the Coach House Marquee, with a fully-draped starlit ceiling and a colour-wash lighting system that can compliment your chosen theme.
The Coach House with its rustic charm is licensed for Civil Ceremonies or if you prefer the magic of being married outside the Garden Pavilion offers a fantastic backdrop of the glorious English countryside.

A decked patio and separate bar and lounge area are available for drinks and canapés, where guests can enjoy the simply stunning views over the open countryside and romantic garden pavilion.

For your chance to WIN the wedding of your dreams like Lewis & Katie did, click on the link above to enter our latest Bespoke Win a Wedding Competitions.